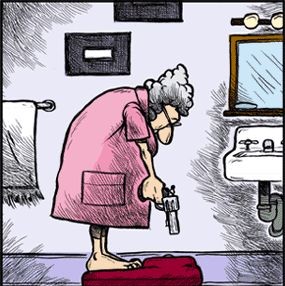 The Scale and Your Mindset

It happens every year.  And it starts with the New Year.  A resolution. To lose 20 pounds. Gyms see a spike in new members.  People become obsessed with the scale. Our mood can be affected by the number staring back at us.

We may even have rituals before stepping on that scale.  I used to step on the scale 3 times, three different ways.  Crazy, I know.  I would place the scale in the middle of the bathroom doorway.  The first weigh-in would be a normal step on the scale.  Get off.  Then I would grab the top of the door casing, pulling up slightly and step on the scale to show a lighter number.  Step off.  My final scale weigh-in would be just like the first, but this time I exhale all the air out of my lungs (cause we always have to consider the weight of the air we breathe!).  Then I would cautiously step one foot on, then gently step on with the other foot.  And for whatever reason, that third weigh-in would often be lighter than the first, sometimes as much as a pound.  YES!!  I was instantly in a better mood.  But those times when the scale would not cooperate?  I let it affect me and my day would be instantly starting on the wrong foot.

Anyone else have a similar or crazier process than I did?

But what we need to realize that the scale is just one tool we use to track our health and fitness.

There are several other bio-markers that we use:

And there are several things that can affect the scale:

Think of it this way.  If you were going to tune up your car, you wouldn’t use just a wrench.  You would need several tools to get your vehicle running properly.  Same thing with your health and weight.  The scale is just one tool.  And we need to look all of them to see the big picture.

During our last Nutrition Challenge, I had clients who did not feel they were losing weight as fast as the would have liked to.  In their mind the scale was the only measuring tool.  However, they reported other positive feedback.  Their clothes were fitting better.  They were getting compliments at work on how they looked.  They had more energy because they were eating better.  But still, the number on the scale was the determining factor.

Until they got their body fat test completed…

What they found out was they had gained lean body mass and lowered their overall body fat percentage!  While the scale was not showing the number they were hoping for, their body was in fact…changing.

Think of it this way.  Close your eyes.  Now picture what you would want to look like.

Now, if you looked like that, would you give a rat’s ass what the scale said??

If you have any questions regarding this blog post or anything nutrition related, please contact Brett, Brittany or Wes at coastrangenutrition@gmail.com.